How to Escape Bangkok for a Day: Ballin' Boat Party in Pattaya !

You know what has always made me jealous of my friends living in Hong Kong? Mind-erasing boat parties. When I heard about the libertine expat life of Asia, these nautical tales of music x waves x homies teased my heart with promises of the ultimate adventure! What could be more thrilling than dancing with your friends on a boat in the middle of paradise? 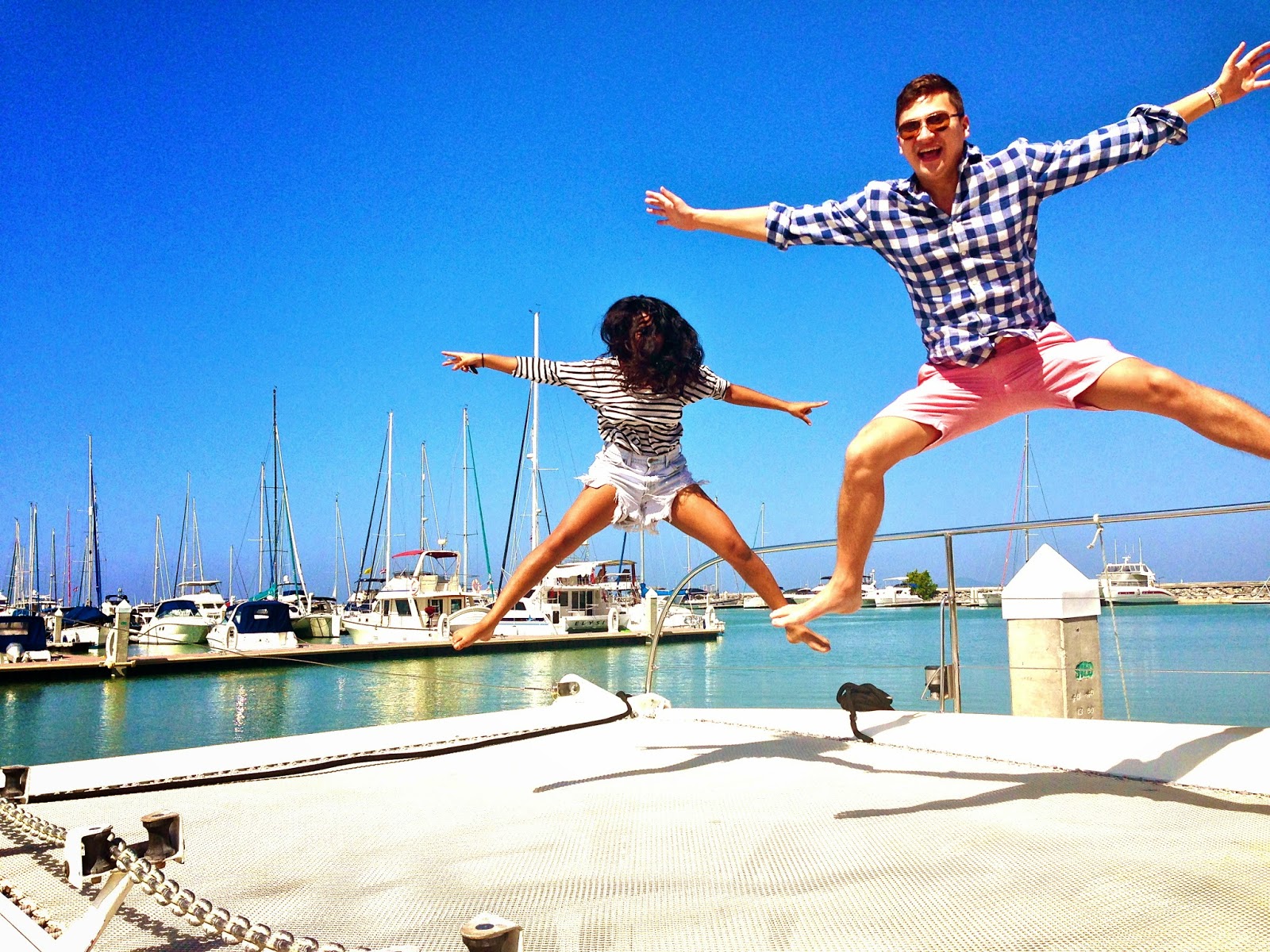 But living in Bangkok the last year has not really afforded me the opportunities that Hong Kong expats had. I've been NEAR to water, like this Kolour party, but golly I wanted to be the meat in a sky and sea sandwich. 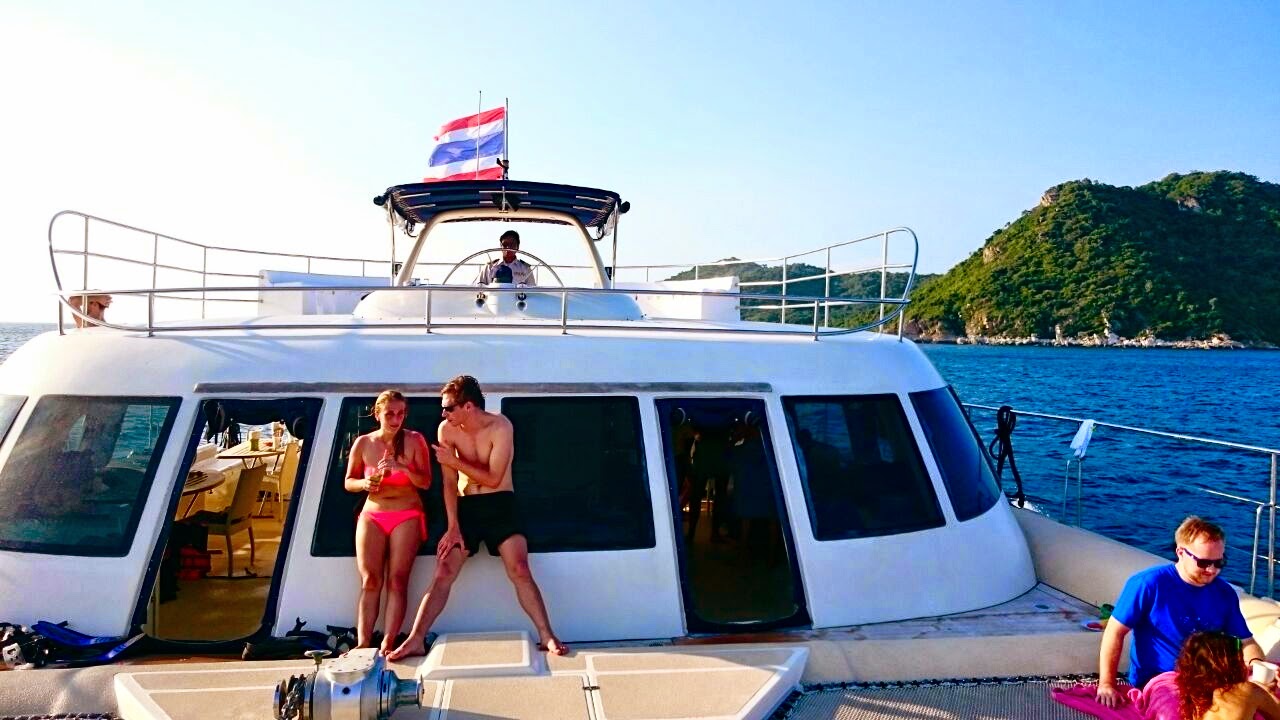 Enter an alcohol brand that has some talented French people running their Thailand distribution. These French dudes have launched a boat party that takes place on a 71ft catamaran right off the coast of Pattaya, called Dillon: La Route du Rhum. 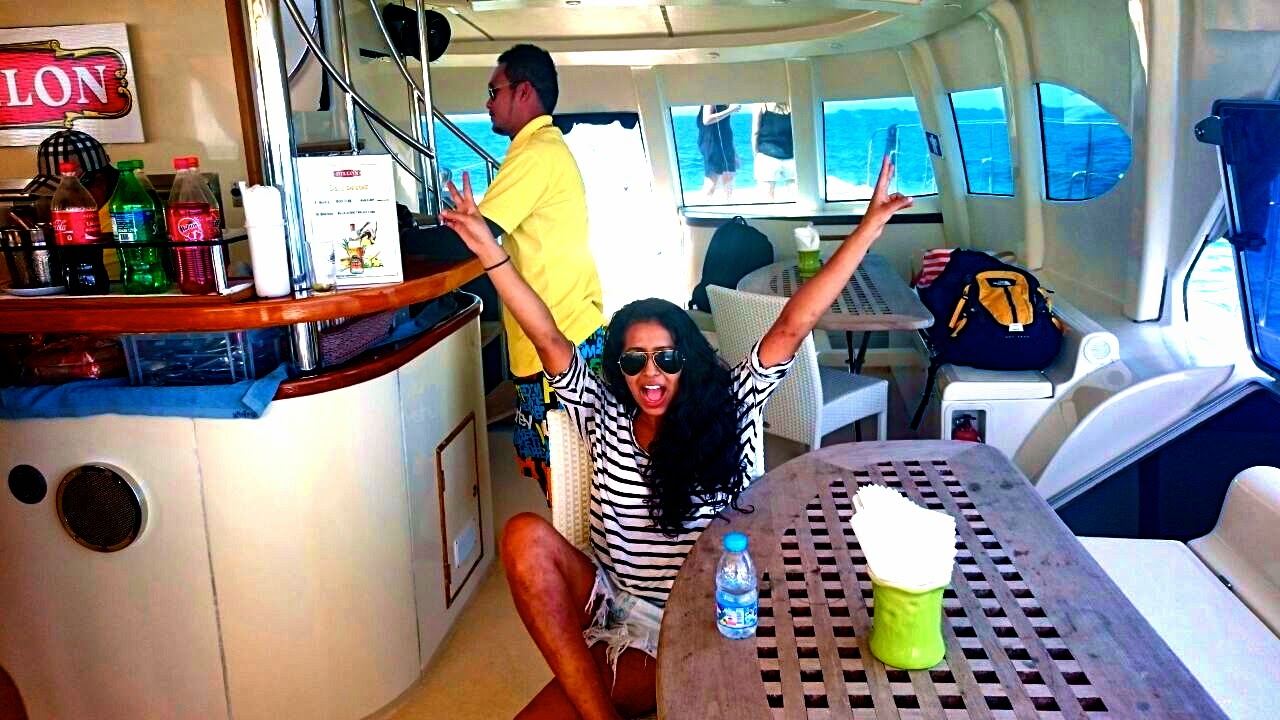 Luckily for him, cher ami and fellow Trinity alumnus, Steve, was visiting from Toronto that weekend. In true Lil'Fel fashion I took his jetlagged ass straight from the airport to the Kolour rooftop party (one of the coolest parties in Bangkok with electro/house djs) a couple hours before we were set to leave on this boat party day trip thing I had heard about from a friend. Jetlag is for weenies. Despite him being in a moribund state of exhaustion it was definitely the best idea ever.

Here is why this Catamaran Boat Party stole my heart as one of my favourite events in and around my hood.

1. Close convenient ride from Bangkok. La Route du Rhum boat party is the perfect paradisiac escape for the Bangkok city dweller as it is a simple day trip just a couple hours outside the city. We took a taxi for 1200 Baht from Asok to Jomtien Pier. We left at 745 am and arrived at 1015am. We didn't need to hire a bus or anything, just jumped in any ol' taxi. 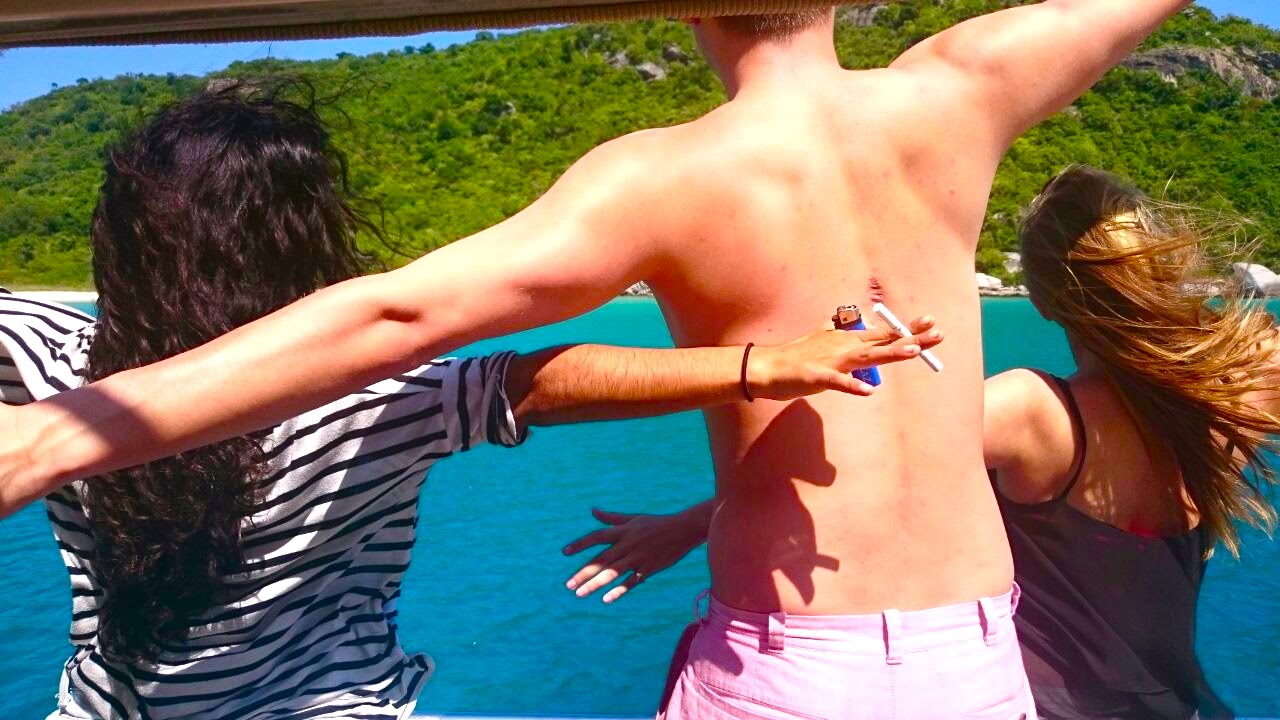 2. Reasonably Priced. For around 2500 TBH you have 8 hours on a boat that goes to a beautiful and secluded island and includes lunch. 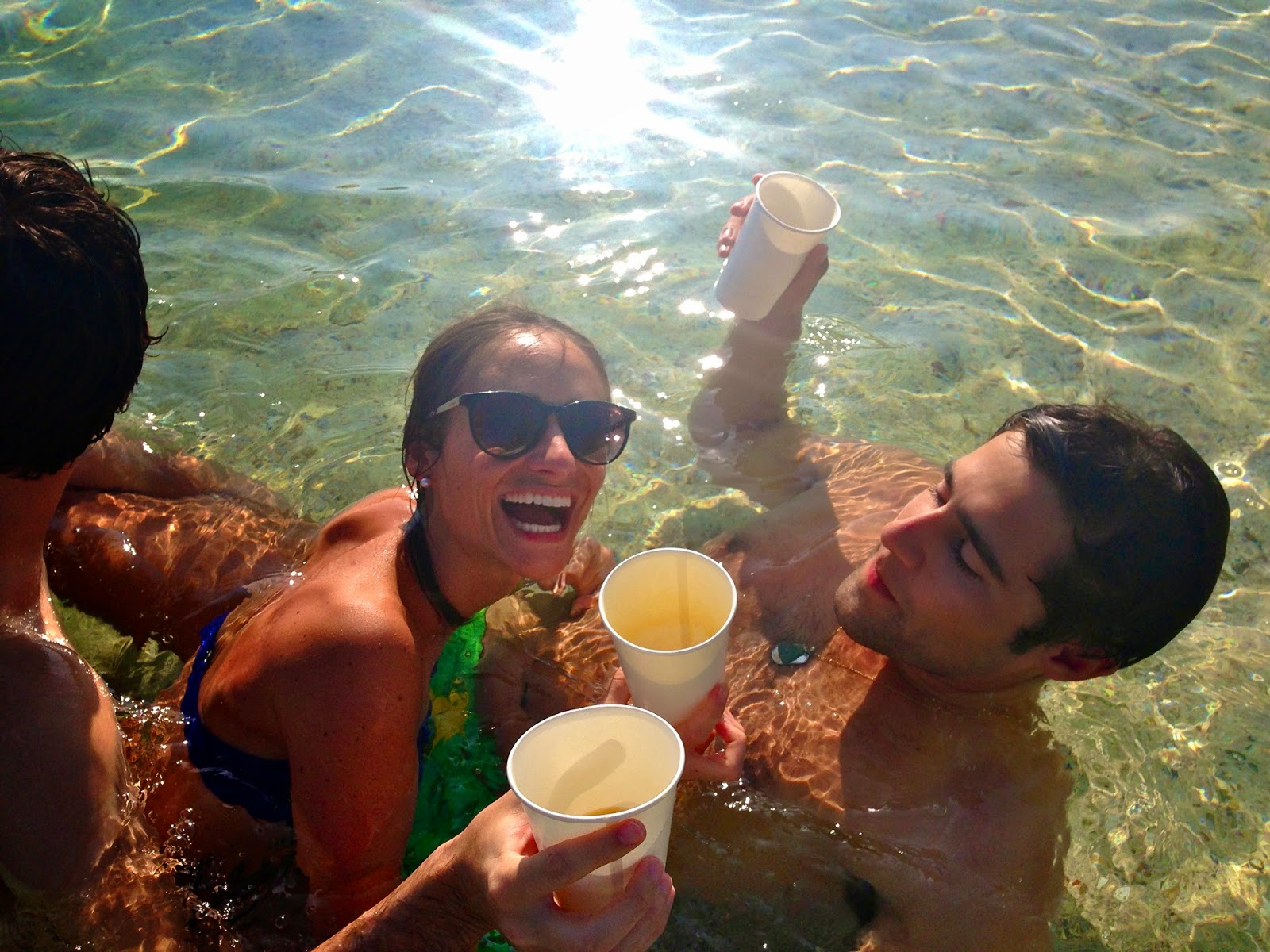 3. Unlimited alcohol. Dillon Rum, obvi. I admit an alacrity for daytime drinking.. They served delicious mojitos, punch and other strong poisons if your heart desired it. But tread carefully! By noon you'll be as lubricated as Hemingway by night (a brilliant drunk who also had the perspicacity to say, "Don't bother with churches, governments buildings or city squares. If you want to know about a culture, spend a night in its bars."). 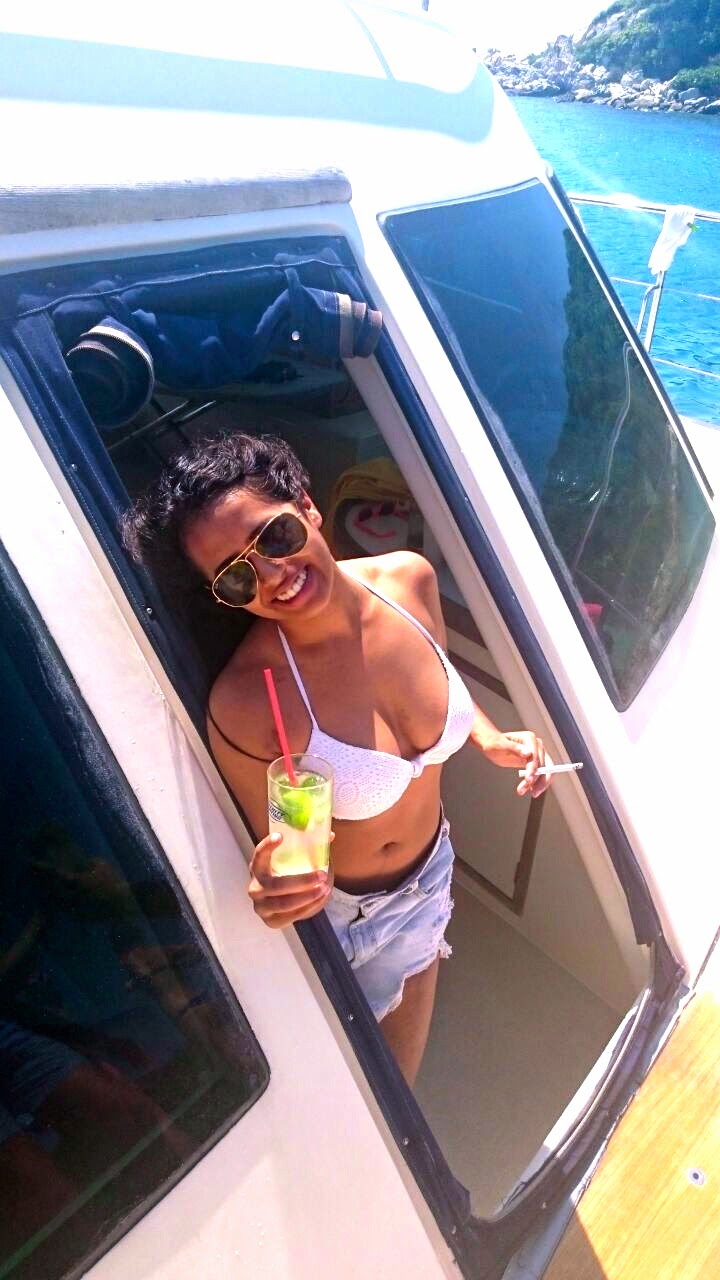 4. Gorgeous & exhilarating! The catamaran had a trampoline that we used to skyrocket into the sea..and then eventually tan or chill on. We also stopped at a secluded island where we drank and danced with the local guys. The water was clear and beautiful, nothing at all like the river boat parties in Bangkok. 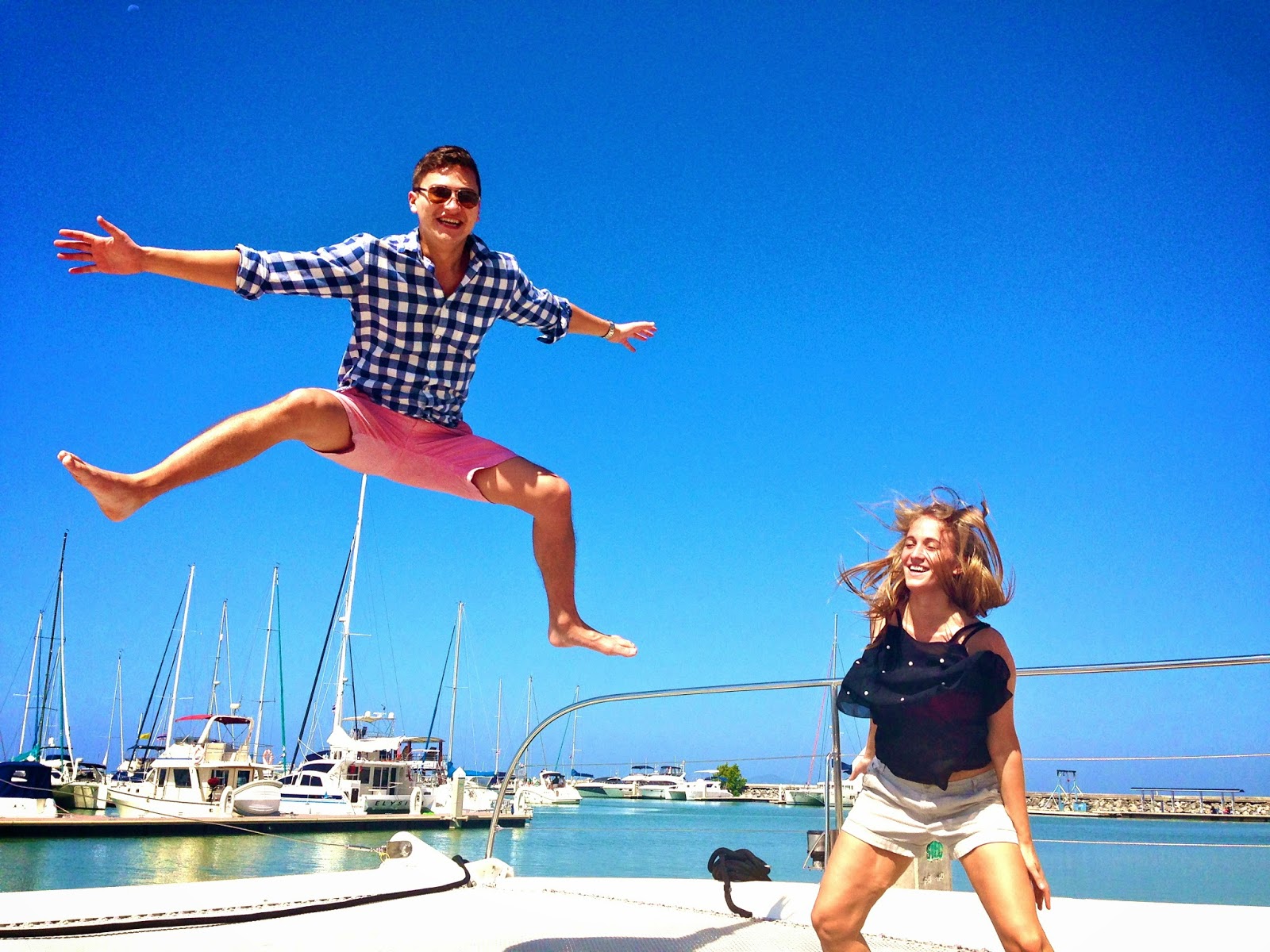 5. Young cool people & good vibes. Not pretentious and stiff with Russian models and money grubbin' old expats (despite it being in Pattaya) nor a scrubster backpacker scene either with dreadlocked elephant panters. The group were young professionals, with an overdose of French people..And you know how I feel about hanging out with too many French people, right? On se calme, I'm joking. Mostly expats but some Thai people as well.  Also, anyone could play their own tunes on the boat, which of course I did with my pirated music (heh). 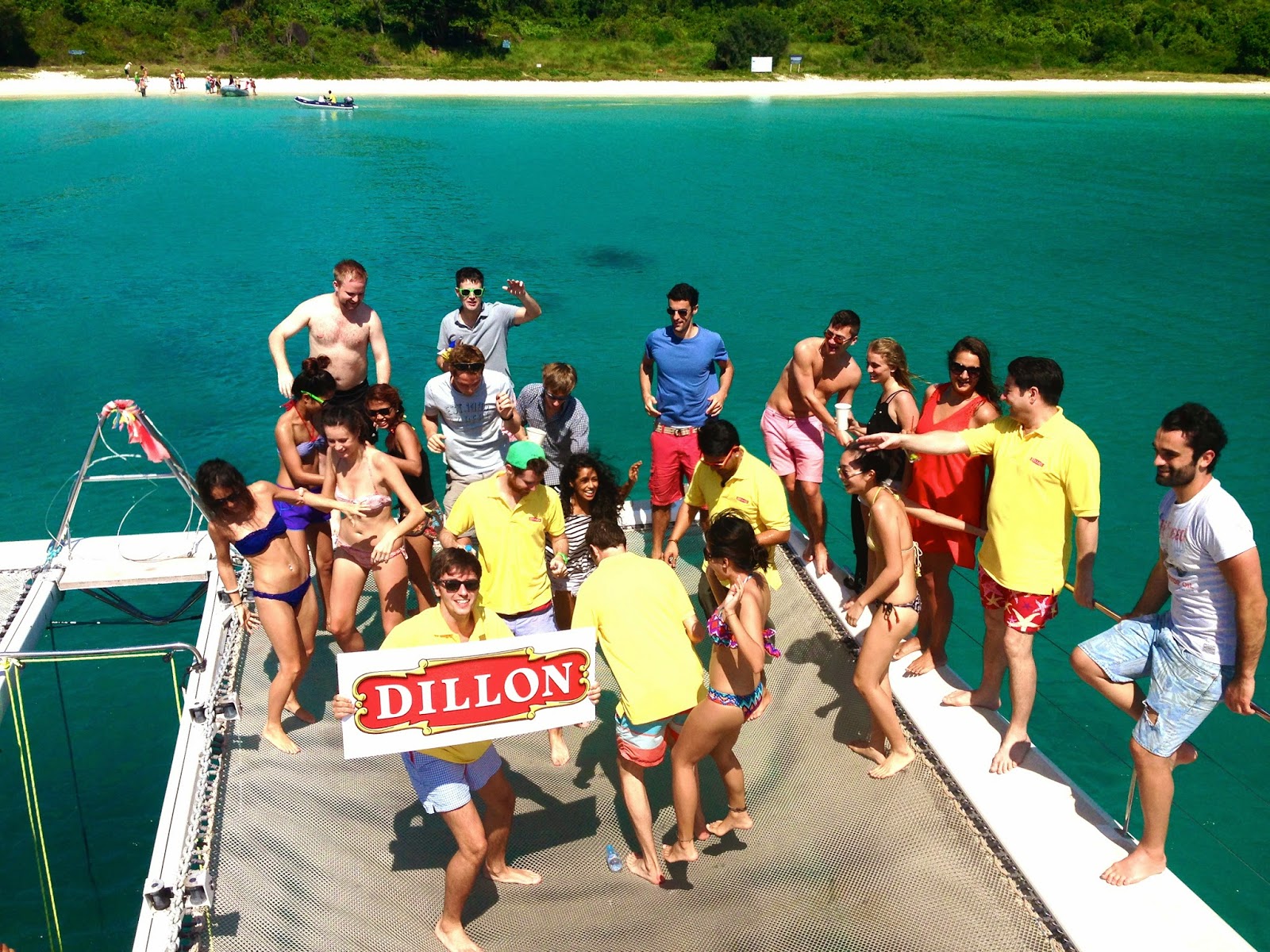 Anyhoo, this event is great way to travel outside of Bangkok for the day. With good music, people, drinks and most importantly, paradise I suggest you check out Dillon: La Route du Rhum if you have the chance. I don't know how often it will take place, but the next one will be on December 20th. Unfortunately, I will not be attending because I am going to do something a bit..nuts..for the holidays. Will tell you next time! 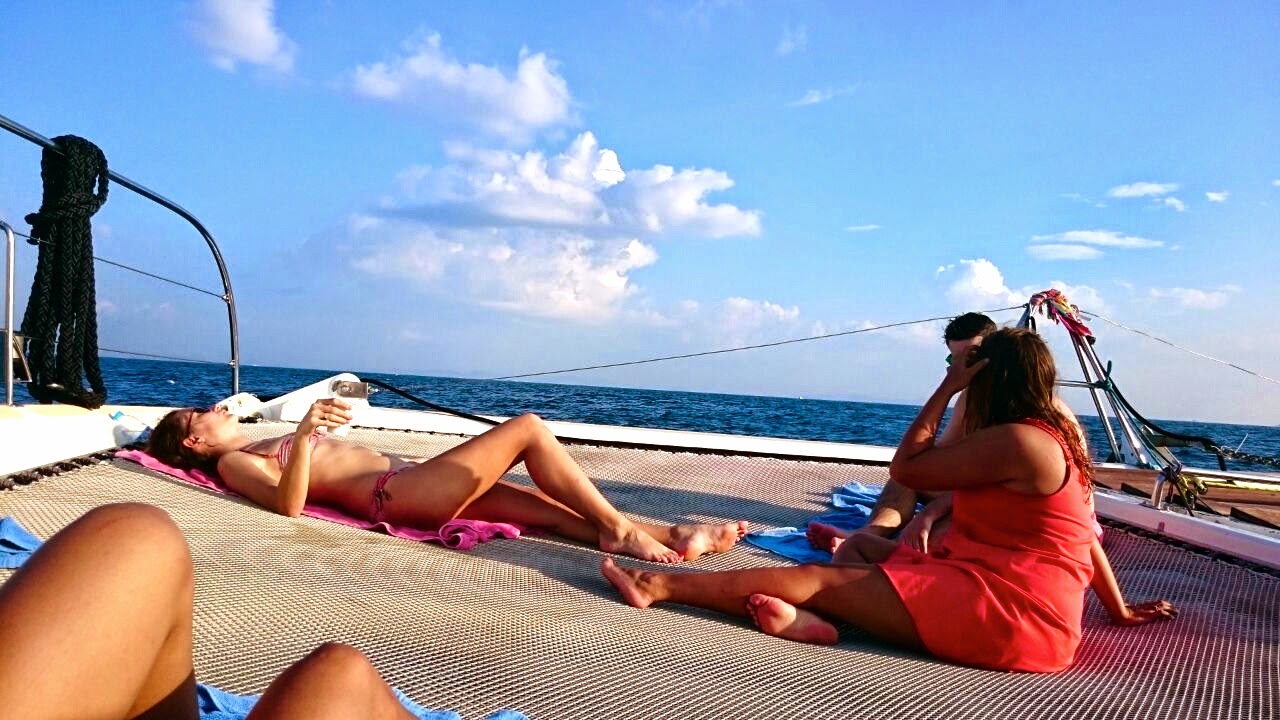 If you don't feel like dancing, jumping, drinking, there is space for tanning too 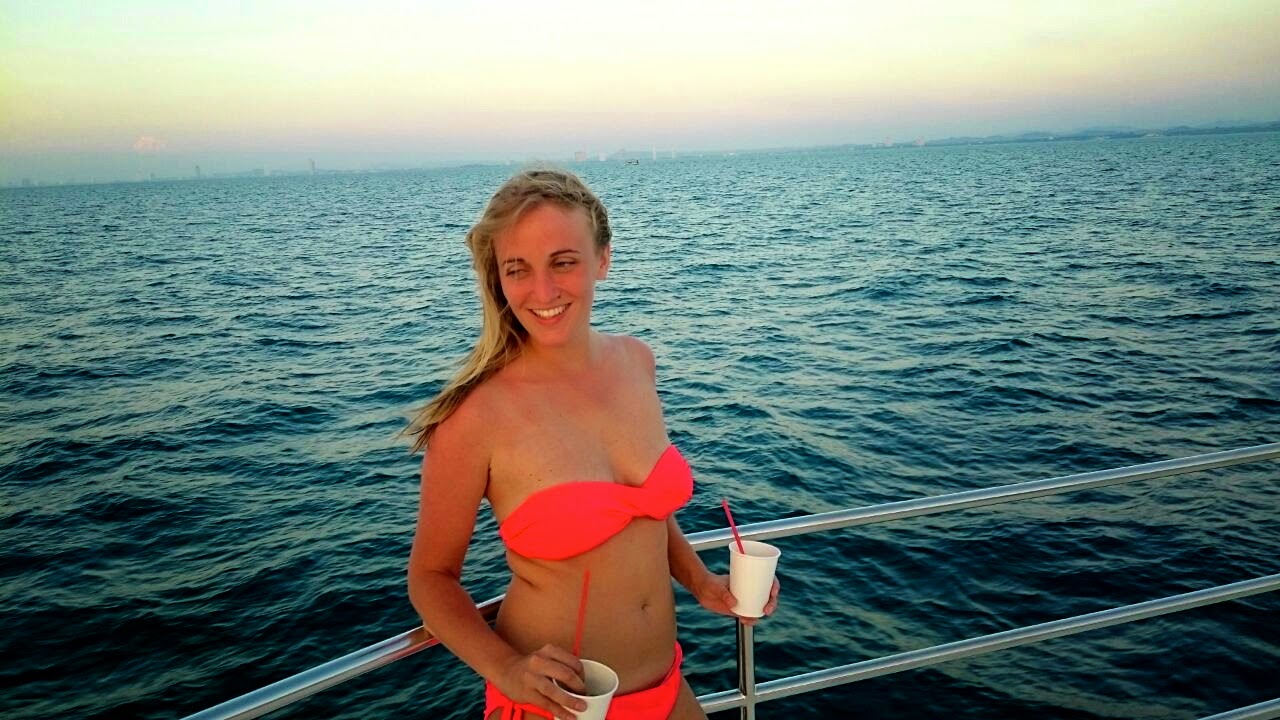 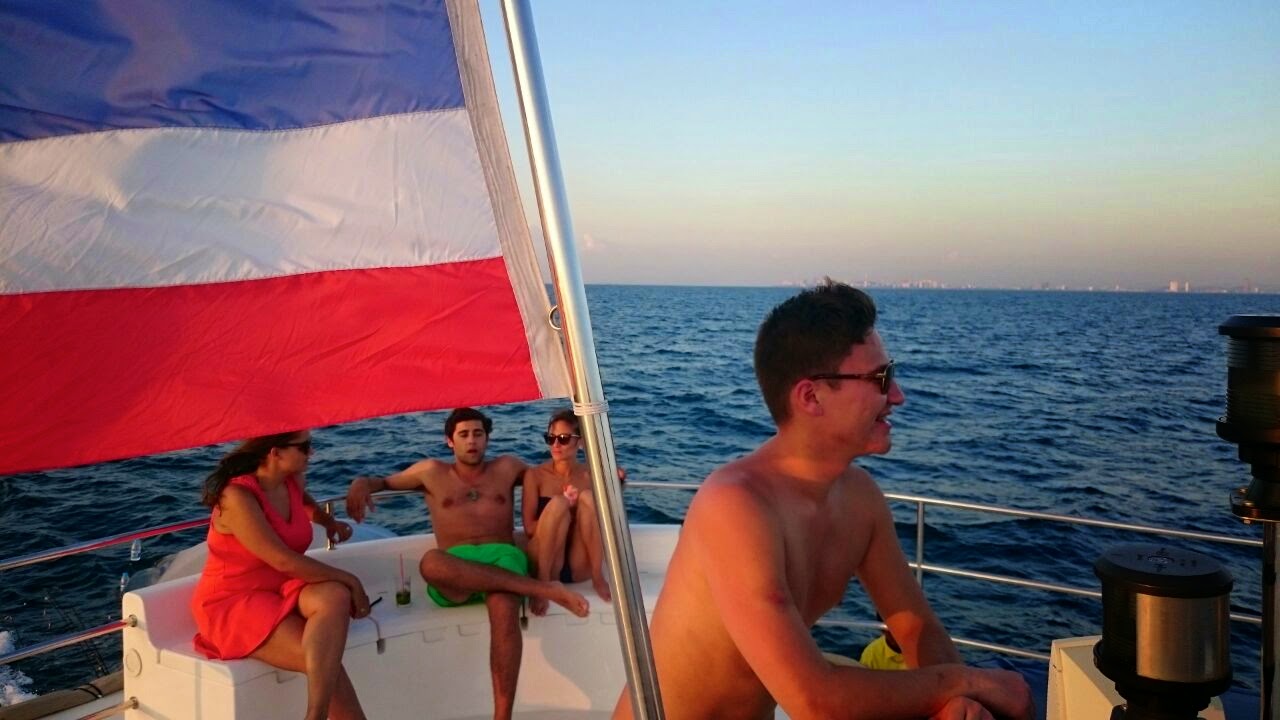 From Toronto to Bangkok to Catamaran Boat Party in Pattaya. What a trooper! 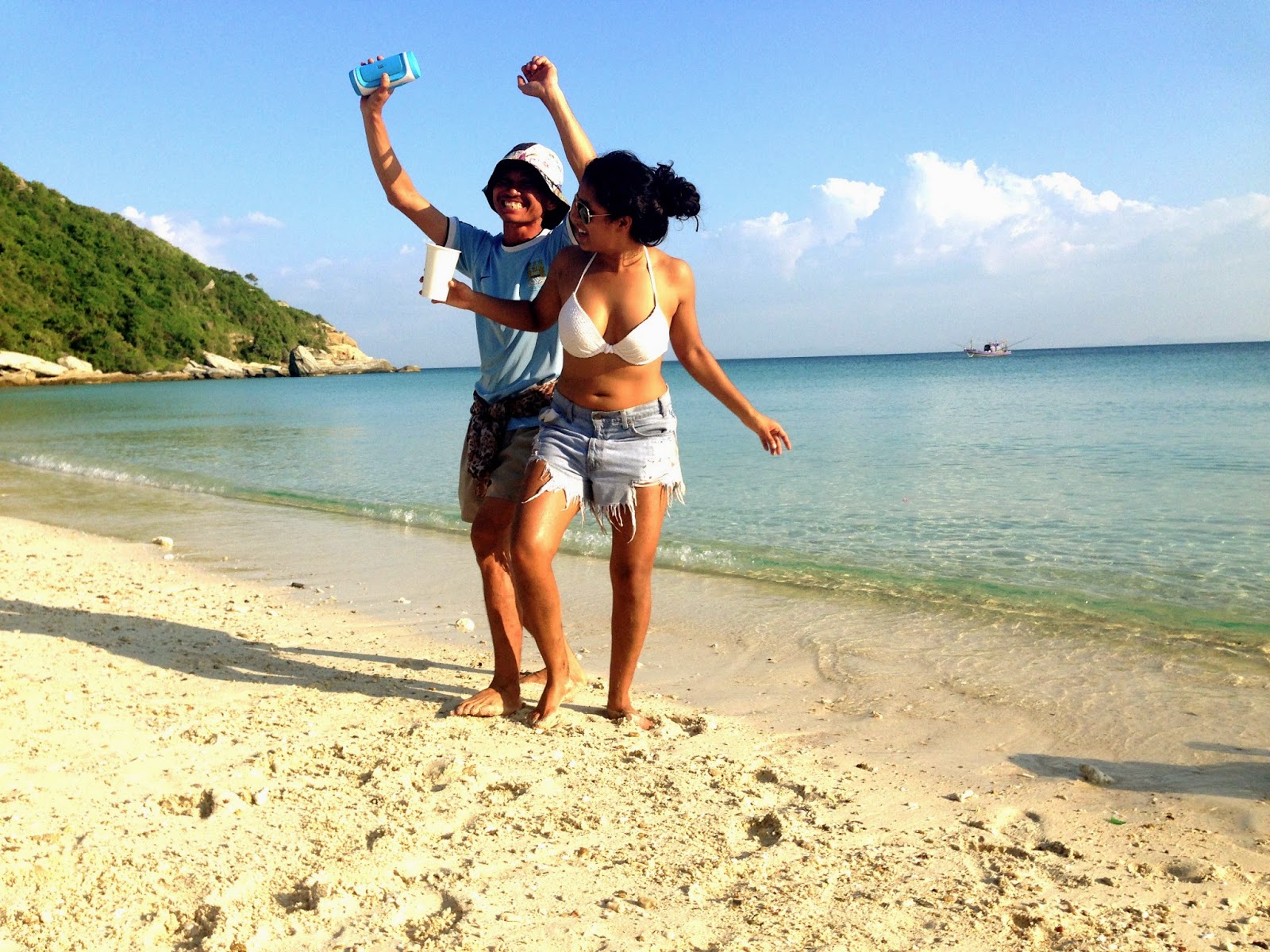 Dancing with my newfound hombre. I brought the music, he brought the whisky. Ying and Yang.

Where to find cool dive bars: Toronto in Bangkok