After grinding the corporate stone for three years in the tech startup scene of Southeast Asia, I decided to take time off to pursue an MBA (spoiler alert: didn't go). But my first order of business was to master the discipline of mindfulness. And thus began my Great Indian Odyssey with a silent retreat for 10 days in Rajasthan, tantric yoga for a month in the holy city of Rishikesh (tantra's not the naughtiness you think, pervs) and studying Buddhism in the Himalayas less than a kilometer away from where the D. Lama himself lives! Before becoming an ancient wise one, I faced many challenges traveling as a woman in India- absolutely not mindful of my womaness in a society still largely trying to come to terms with its gender outlook. Below is my guide to being an idiot the moment you step off the plane and first impressions of a country I have come to love. 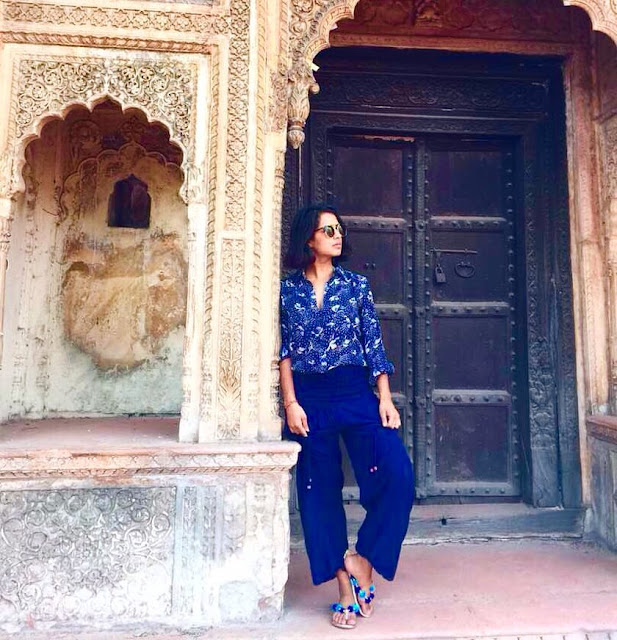 Not wearing tight clothes is one key to not being dumb. (Vintage cuban shirt from Bangkok's Chatuchak market, $3.3 USD btw omg)

Getting to Rishikesh from Delhi: An Idiot's Guide

1. Arrive at midnight in Delhi with no hotel booked, a dead phone and without an adaptor to charge it. Planning is overrated. People have voices. Ask locals for help. This is especially useful when they don't speak English. The only thing you need to know is your destination. In this case? Rishikesh because you're a unique snowflake who wants to do yoga on a gap year.

2. Despite having not the slightest clue of where to go and how to get there, learn Indian sign language fast. This consists of varying finger pointing intensities and mysterious head bobbles. Once you have mastered the language you will learn you must take public transportation to the ICBD, Kashmiri Gate. It may take an hour and you may be the only girl of a bus full of men, but when did that ever turn out badly?

3. Wear your tightest clothes. With a disturbing lack of women in public spaces, especially when travelling by night, put unnecessary effort in coveting the heavy blunt stares of Indian men. Breath in the fresh air of repressed sexuality, girls! It's a whole new ozone really.

4. Once at the dingy public bus station at 1am, continue to converse with more people who don't understand English. If you're lucky, the ticket sellers will be sleeping and will give you a dismissive bobble. The Sleeping Bobble may be interpreted as liberally as you want. When extracting info from sleeping men gets too exciting, proceed to walk around in circles past rows of more sleeping people. Contemplate laying next to them, until someone takes pity on you and buys you tea, samosas and biscuits.

5. After an hour of local bus station loitering and fruitless Rishikesh inquiries, accept the biscuit from a kind biscuit man who uses said biscuits to (successfully) soften the news that there is in fact no bus to Rishikesh at 2am. Embrace the sense of dread that looms over your exhausted body. This vulnerability look, coupled with your butt forming lulu lemons, will attract a counsel of Indian men who will gather to help you find your way. Trust them when they say that Hardwar takes you to an hour outside of Rishikesh where you can transfer buses. They say too many choices make you unhappy, right? You're laughing now because right now you have none.

6. Finally, board the gaudiest red bus with a half inch level of grime on seats and a door that doesn't close. You'll be free to enjoy the soothing honks of a bus gone mad, impossible weaving (swerving?) through traffic and high-pitched Indian songs for the next 5-6 hours. Use the chaos and your impending death as a way to get a head start on Buddhism ideals of transience that you had come to India to learn in the first place. Don't try to read the New Yorker's article about Islam erasure in Indian poetry because you'll puke.

7. Arrive early morning alive and reborn really where a blue eyed mystic man will greet you. Do not be alarmed when he menacingly shakes a wand of peacock feathers at you and chants in deep undertones. May be a hex or he may just be a Harry Potter fan. If you wish for the occult entertainment to continue, keep refusing to give him money while avoiding eye contact/ his spells.

Important Note: You may be the only female again on the bus travelling alone. Calmly clutch your belongings and put on a polite but firm smile. Best to avoid confrontation when people (men) sit too close to you or whisper 'I love you' while you're sleeping on the bus. What's lovelier than waking up to a stranger an inch from your face looking at you?

8. And finally trust the high rickshaw driver who offers you a joint when you arrive in Rishikesh city still without phone, internet, hotel or plan. Laxman Jhula he says, while he pulls a deep drag and insouciantly hauls ass around moribund mountain roads. The journey will cost you 200 rupees.  Tip: Ganga View Resort is beautiful but pricey (3000 rupees per night).

9. Nine hours of excitement and travel later warrants a nice meal. It may or may not give you chocolate rain belly and where the toilets may or may not have a seat and/or toilet paper.


What's the lesson here? Planning is for squares.