Bangkok Problems: Getting to the Beach While there is a Coup D'etat

Need a quick weekend escape from a city that is in the midst of a potential political coup and its upcoming illegitimate elections that could turn violent? Yea, well even though things have been largely peaceful here in Bangkok, I felt a small tickle of an unfamiliar feeling called concern...Concern that the geographical divide that keeps the Yellow and Red shirts from rampant violence would close as conflicting factions came to a head at the polls. How much would it suck to die from some stray bullet not even meant for you? 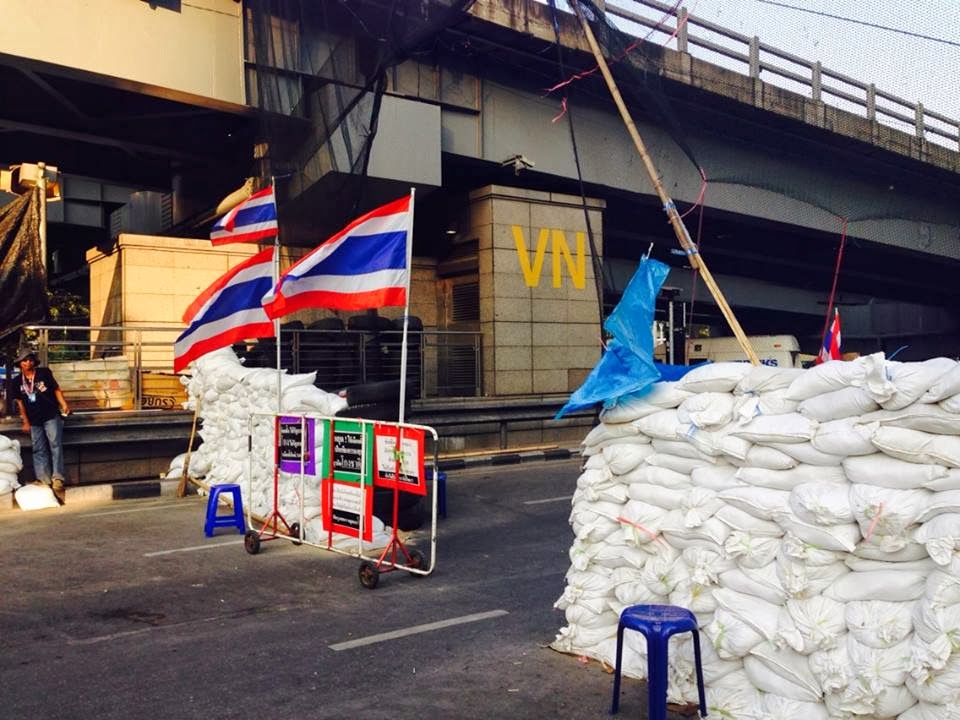 I live in one of the biggest protest sites at Asok and (lucky me) I work at the other in Lumpini (above, this is next to the entrance of my office, woo). I ride Red Rhonda (bicycle) every day through barricades that have gotten bigger and sturdier each day. My friend James joked that the size of the barricades is a pretty good indicator of how worried we should be (which had largely been..not at all). Maybe he wasn't wrong. At first in early December the barricades were just a couple tires tall, now they are 6 levels high reinforced with sacks of rice and netting (to catch grenades?!). I've taken up jogging in Lumpini Park and I can't help but marvel at the fact that I am running with my short pink booty shorts and iPhone like I have not a care in the world while maybe 1000s of people have camped into the park refugee styles in non-relinquishing protest to a government they believe is corrupt (and may well be). Proof truly that people have the capacity to normalize any damn situation. These people are preparing for war yet we smile each other in the park while my fat arse struggles to do squats.

Anyways, did I think it was a good idea to take a weekend trip from Bangkok during the protests? Yes. I've taken to hanging out with a gaggle of French girls and so myself and ten Frenchmen headed to Koh Samet, an island 4 hours from Bangkok. I swear, if you want to learn French go to Thailand over Paris anyday. I speak more here than I ever did in 3 years of dating the ex Parisian amour.

Koh Samet is the closest island to Bangkok and thus serves as a simple and cheap weekend trip for expats. While, Koh Chang remains my favourite, Koh Samet is just slightly more accessible. We left comfortably on Saturday morning at 8:30, whereas for Koh Chang you have to leave at like 4 am and end up just exhausted during the day while there. If you have only the weekend do Koh Samet. Long weekend Koh Chang is my first recommendation. AND NEVER PATTAYA.

Here's our plan if it helps you with yours! 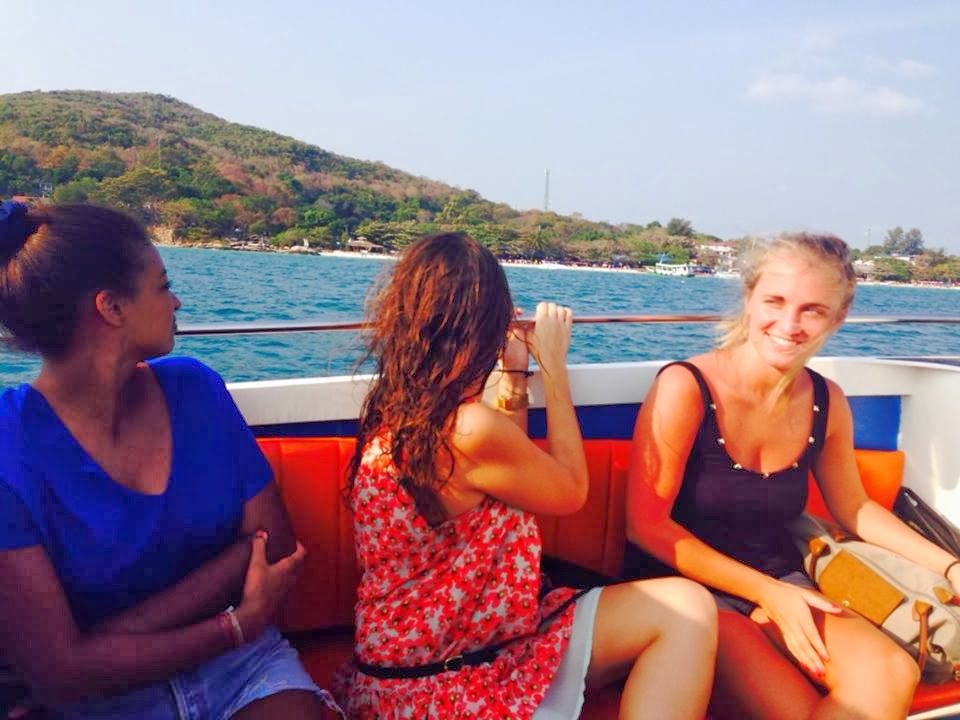 Where to Stay on Koh Samet
Beach: Tubtim
It is beautiful, has a volleyball net and not super busy. Granted, there tend to be mostly plumpy old tourists, but it's where the group of French alway stay.

Lodging
Tubtim: 700 baht/pax in 3 bed a/c room with towels, shampoo and delicious breakfast. It's not the cheapest spot but the rooms are very clean and the service is nice. As a young profesh' I can afford this preference.

Phudsa: 350 baht/pax for 2 bed fan room. Cheaper option but service is not great and they constantly try to change the price. They don't know how to appreciate repeat customers from what I understand, and I have no patience for that. It's where the other half of our group stayed and where they usually do. 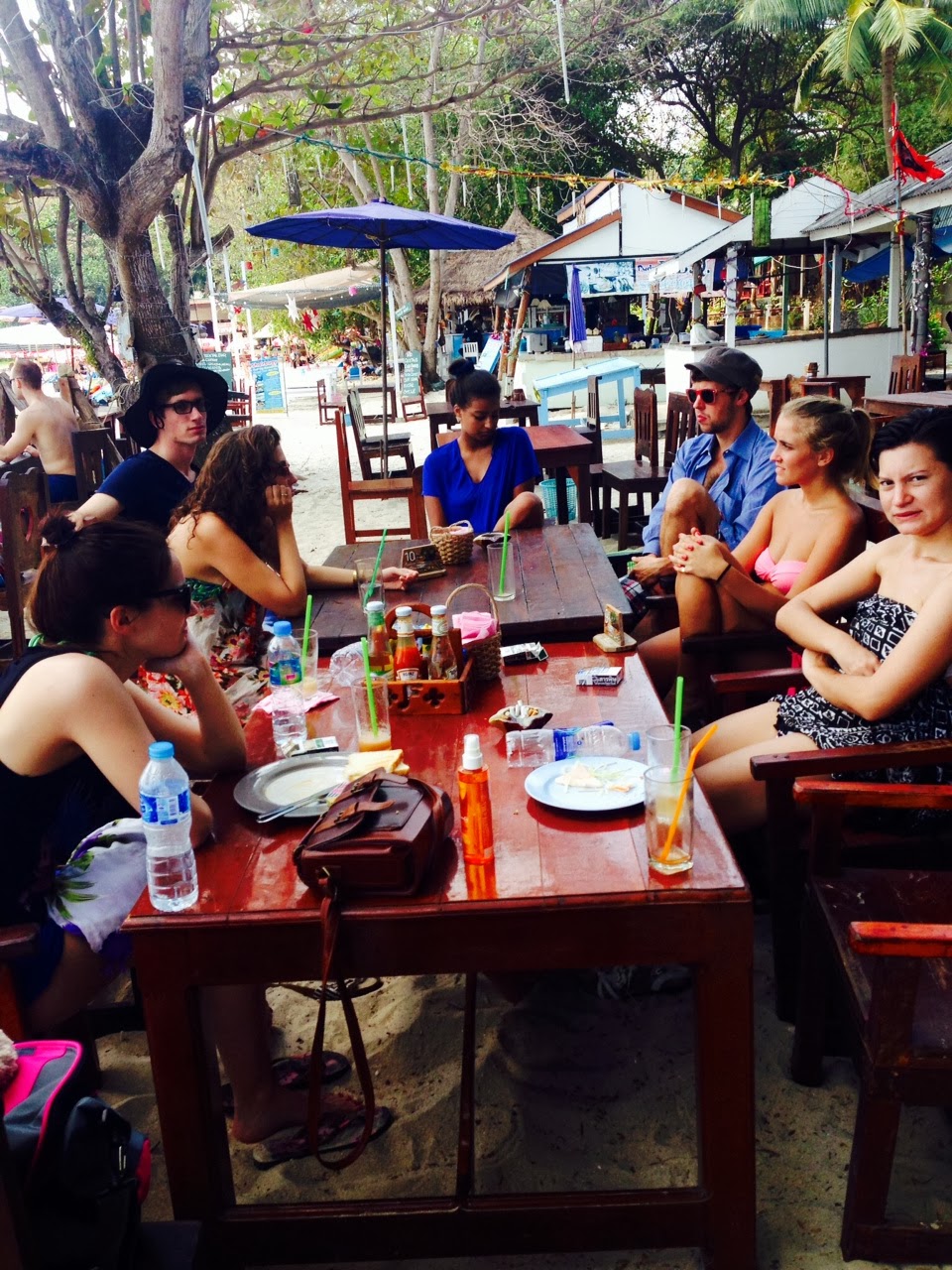 The group totally hungover hanging out at Phudsa.

Where to Eat the Best and Cheapest Seafood Dinner Everrrr
Tubtim beachside restaurant. This is not an exaggeration, the barbecue fish I had was the best I had ever tried. They bring it in a dish with a fire under it so it slowly cooks in all the flavours even more. We ordered fish, squid, chicken, crab fried rice, corn, potatoes and beers and it came up to 300 baht/pax (and we had food to spare)!!! Super impressed.

Where to Party
There are a couple big beachside bars but the gay bar is infinitely more fun. And not fun in a purely straight girl in a gay bar fun, but overall the music is better and the crowd. Our French gang clashed with another massive French gang. While they eyed each other wearily we all ultimately globbed into an island of straight people dancing. Great night that ended in a very modest late night swim! 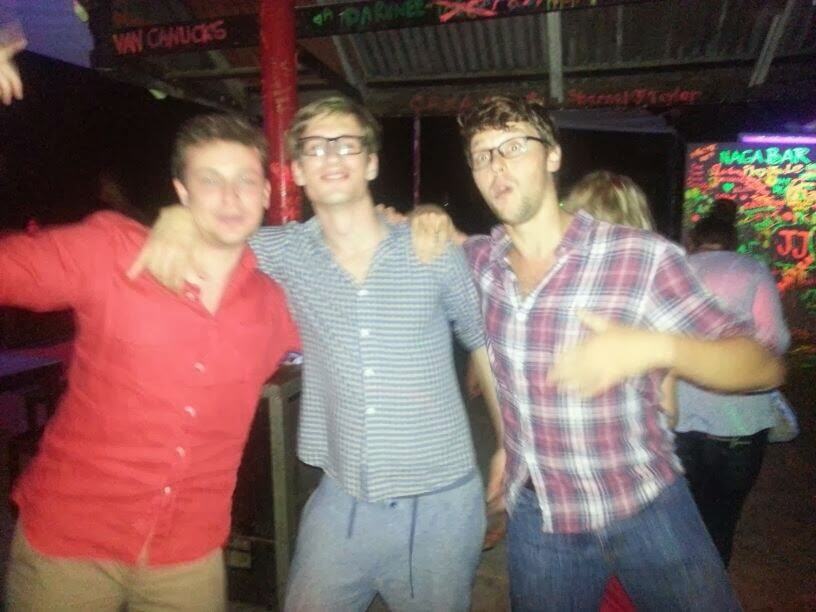 Conclusion
Last time I was in Koh Samet it was 2009 and it kind of sucked. It was dirty with bottles and plastic on the beach and the people there were not as lively and fun as Koh Chang. But I must say it has come a long way. The clubs are super developed and the clean-up is much better. For a weekend trip from Bangkok when on a budget I recommend this.

Please share your thoughts if there is anything I'm missing.

Full Moon Party: The Party With no End (VIDEO)

The Non-Douchbag Guide to the Land of Vice: Koh Phangan

Guide to my Fav' Island for Love and Adventure