There were many things that frustrated me to hell about my time as fresh grad in Indonesia: the typical traffic jams, poor public infrastructure, and lack of green spaces in Jakarta, but its art remains unparalleled in the region (in my humble opinion as a six year standing resident of Southeast Asia).

And as a 24 year old, I had the unusual, albeit coolest opportunity to sit down with Indonesia's best underground artists to understand their perspective for my local art magazine/biz +sixtwo. I am sharing one or two here because when you hit 30 years old, it's a time to start re-reading books and looking backwards for a fresh perspective, I heard. Currently, I am reexamining my opinions about Jakarta. More on that another time. See below for street artist interviews from the city that raked my patience but had an art community that kept me infinitely intrigued.

For the colourfully inclined, growing up in Jakarta can be difficult. The grays and beiges of city life just beg for rupture and graffiti artist Wormo, aka Arem Kaleva are part of a group of artists that are injecting colour into the public sphere. His work showcases vibrant neon colours, bold typography and the little monsters seen crawling about distinguish the walls of which he has tagged. Wormo is smart, well spoken and his street art is driven not only by his need to break daily routine but also from a belief in the freedom of public space and expression. Arem took some time to meet up with me and explain his work, his beliefs and the life of a graffiti artist. 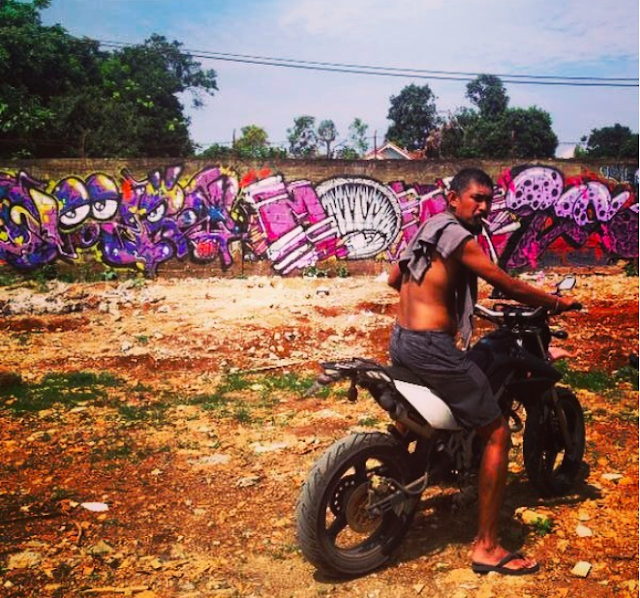 
So, why the name Wormo?My main character is a worm and so Wormo. I started off by painting
worms that eat the concrete. In Jakarta there are too many concrete walls
and so much grey!  So this worm eats it down and adds colour to the monotony.

What did you want to be when you were a little boy? I have always loved drawing. My family and uncles are artists
and that gave me my love for colours. In highschool I pursued graphic
design but I never thought I would be an artist. In Indonesia you couldn’t
live as an artist at this time.

What turned you from graphic design to street art?
In highschool I did mostly tags. Then in 2004 my work partner thought,
“let’s paint on the street!” We were both graphic designers and it was boring to
sit in front of a computer all day. We would would grab a beer and just go to break the routine.

Is graffiti art?
Yea of course. Quality graffiti is. Even the tags you can see the quality. Everyone has a style.

What's your opinion on the street art scene in Jakarta?
Street art in Jakarta is going up and up after experiencing a slump post 2007. Before we all
knew each other in the scene but now I see a lot of quality work now from youngsters I don’t
know. Compared to Yogya, they’ve always had a different style. I think they were the first to
paint in the street and it’s awesome there because it’s just more common to do street art.
In general Yogja is more artistic, and now there is an emerging hip hop style whereas before
you could see a trend of characters and big murals. Also, it’s better there because it’s a smaller
city. Here you have to take a motorbike and taxi to get anywhere! 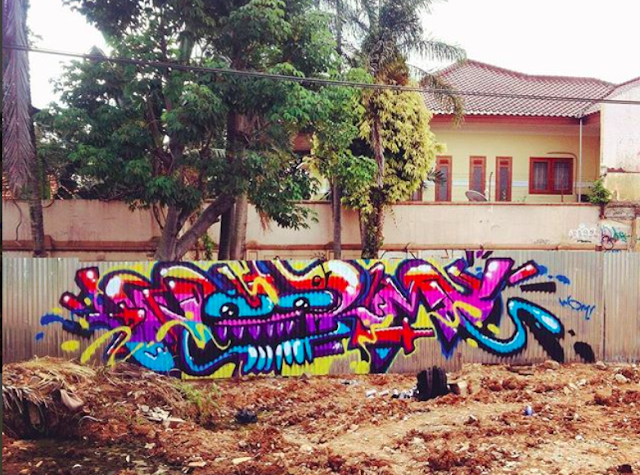 Where does your international inspiration come from? Suiko from Japan, Main Street Killahs (MSK) crew from LA,
and CMK Crew from Boston. I think Japanese artist have a very
distinct style because their writing and culture is so different.

When you're not tagging walls, what's your day job?Graphic designer for Blitz Mega, movie theatre.

Is there a difference between graffiti and vandalism?


For me both are important. Vandalism is the urge to put your
name everywhere. But quality is important, and that’s where the art is.
Graffiti is all about freedom. I also believe that since we see so much advertising in
public space we have the same right as artists to display our messages whether it be
vandalism or graffiti. Just because they have money doesn’t mean they have the right to f
orce people to look at it. We also have that right.