One hungover Sunday in Bangkok while equipping myself with the fundamentals of Latin such as ad fondum (bottoms up) and nunc est bibendum (now we drink), I came across some serious wisdom nuggets from my old boy, Horace. He said:

Those who cross the sea,
Change the skies,
But not their Souls.

I found this especially salient for the young and restless such as myself. I had spent the last 12 years living in foreign countries, moving every 2 to 3 years. While I loved the beach parties and the (INSANE) professional growth, it became clear that life a l'etranger wasn't just a walk in the park. 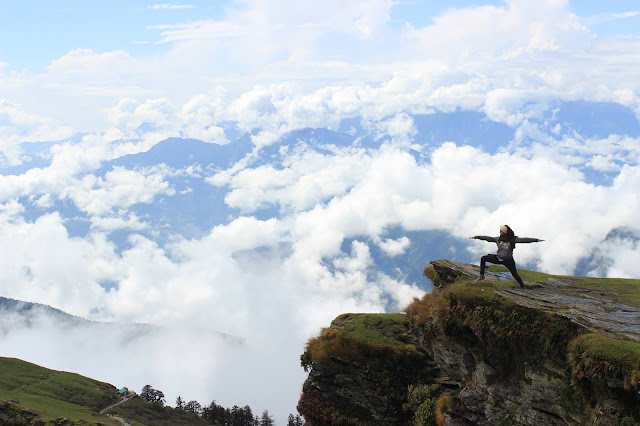 The Dream of Living Abroad

Coming from a family of oldschool Guyanese immigrants who thought the only professions worth pursuing where DLEs (doctors, lawyers and engineers), I had a very sophomoric understanding of what IR entailed as a degree and even a potential career path. I was admittedly pulled by a nebulous dream that I may work abroad one day, first as the foreign correspondent for a major newspaper, then later realizing I'd rather make news than cover news, as a part of the Canadian foreign service or the UN. You see, I really didn't know what other degrees could light my rocketship out of Toronto, and international business courses at the community college sounded dreadful.

I don't think I was alone in my ambitions to travel the world and do good. Most of the kids in my first year classes thought they were going to study international law and fight the good fight for human rights. I know maybe 4 people who have maintained this path. 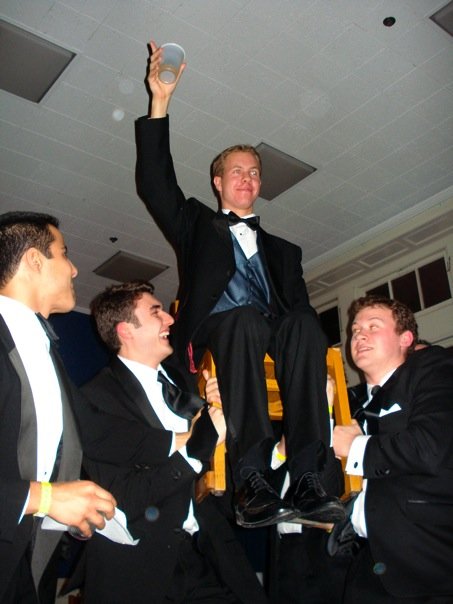 
To skip the long version, I'll tell you this: I enjoyed an international career path albeit not the public sphere one. I've worked in Paris, Jakarta, Bangkok, and Singapore in my adult life. My career path looks like the following:

While there are a gazillion reasons to study or work abroad, there are some tough moments too. I've shared some lessons below to help anyone in their considerations. I hope it helps, dear travelers!

1. There are no such thing as long vacations, only visiting my home and family when I have time off

For the first couple years of my career I couldn't afford to fly home all the time. When I was an intern for the ILO in Jakarta, I stayed abroad for two whole years. I missed weddings, I missed family members having babies, I missed funerals, I missed thanksgivings with my grandparents whom I love like my own parents, except with the added pressure of time that is absent with others. When I finally could afford to pay my own way I vowed to never miss the important moments. The problem with making money is that the new limitation became time. In Asia and America the standard is 15 days off. I would split a week for Canadian Thanksgiving in October and then a week to make Christmas vacation last.
I loved seeing everyone, but it was when I would see my friends and family from back home doing week long treks in mountains and exploring places that were hard to get to, I noticed there may be a difference in travel styles. Not to say I didn't have crazy holidays, but I hacked it by ensuring I built time in between jobs to travel and do my thang.
The other hack is of course to earn enough where you can pay for your whole family to come along with you on some adventure!

Our first family vacation and my Queen grandmother refused to wear a hoodie. I eventually forced it on her and made her look like the inner bohemian she truly is!

2. I will never again have one group of friends

Perhaps what makes someone good at living abroad is the ability to make deep connections quickly. Being guarded and closed doesn't work when you move every couple of years. Not-by-choice solitude is painful. I've had to put myself out there and open up to people I just met. Of course, I had a proclivity for drinking then that helped a lot. This blog exists partly because partying around the world is an amazing way to meet people and break down formal barriers that exist in normal social settings. Living as an 'other' in a foreign place also has a way of forging deep bonds. I guess it's normal, trials and tribulations help unite.
However, falling in love with friend groups is amazing but it has also been brutal. At the ILO I remember seeing some Australian permanent staff there, maybe a couple years older than myself. Everyday one woman, Miranda, would walk by and never say a world to us the interns. I didn't understand it. We were the same age living in Indonesia, wasn't that enough of a reason to start a conversation? Apparently not. 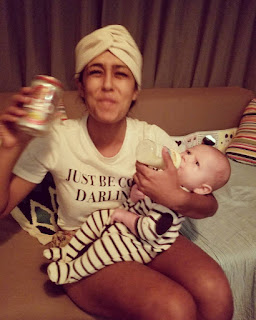 My bestie from Paris moved to Bangkok and had a baby there! When she moved with her new family it was tough. Now we are back in Paris together though!
Later, we finally convinced her to join us for drinks in our building's hot tub (jakarta is over the top like that), and she explained that expats don't make friends with interns or short-term folks because it's not worth it. I understood when I decided to stay in Indonesia for long-term and I made friends with the fun interns. We had amazing weekends exploring volcanoes, cooking together and laughing all the time. They became my best friends, but when they left...I felt like a layer of my skin was being peeled off. I felt raw and exposed. Left behind. We had spent only 6 months together.
I was 23 when I felt that pain. Ten years later I've learned some stuff. Like, it doesn't serve anyone to be jaded! A beautiful hippie in Bali told me about a man she dated only for a few months but changed her life and worldview. I've adopted the mindset that every connection is meaningful even if not forever. The ones that last, last forever. The same Miranda mentioned above recently came to Paris, and even though I hadn't seen her for years (I visited her in India, and she visited me in Singapore) she told me the news about her getting engaged and we spent the week together. I had tears in my eyes.
Now, I've moved back to Paris and am doing an MBA. I've moved in with 3 classmates and I feel a whole round of life friendships being formed. I am also reconnecting with old friends too. I know it's different than if I had stayed in Toronto my whole life. My group of friends would evolve and expand to some extent, and I would have the luxury of intimacy of time. I don't have that, but I am grateful for the other intimacies that come from living abroad together. 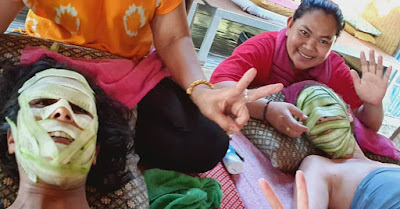 When I thought I was too old for new friends I made a best friend in 2018. We bonded over facials, burritos and love.

3. Your friends abroad become your family - choose your roommates wisely!

One of the most important and hard lessons I learned was that of flatmates. The expat life has its ups, but as expressed above it comes with the down of missing your family. To decrease this divide ever so slightly, I found out that living with friends or people who could become close friends changed my life all together. In the first apartments I had in Bangkok I lived with anyone who had a spare room that was close to work. I even tried living by myself. When I lived with a set of great roommates, I felt the loneliness levels of foreigner life go down.
Being in a new place is isolating enough due to language, culture, and distance from loved ones. Why not go easy on yourself and room with people who can make you smile daily.

4. My heart would break (a lot) from long distance relationships.

I love adventure, I love what's new and novel, and living abroad surrounded me with people who drink the same juice I did. Falling in love with foreigners is inevitable. The weirdest part for me was to realize that every small encounter I dared to pursue had a default expiry date, a ticking time bomb attached to the neck.  As globalized as the world is, borders are still as annoying as shrunken panties under a pair of tight yoga pants (huh?). Job contracts inevitably end, visas run out.  Your relationships are handled like temporary contracts that each party tacitly understands the end date but does not ever acknowledge it until the very end. And the sad reality is that not every one of your romances will be worth dropping or changing your life trajectory over. Whereas in your home hood, each relationship in motion stays in motion unless acted upon by an asshole/crazy bitch force. Time and distance are not forces that fact into normal relationships.

Anyways, I realized that just because I couldn't /wouldn't follow them to their home didn't mean I didn't care about them. Or that it doesn't hurt any less than normal relationships. It does. Don't let it stop you from having torrid and all encompassing romances though! Just prepare yourself for the constant tick-tock of time and how you handle yourself when the clock stops. 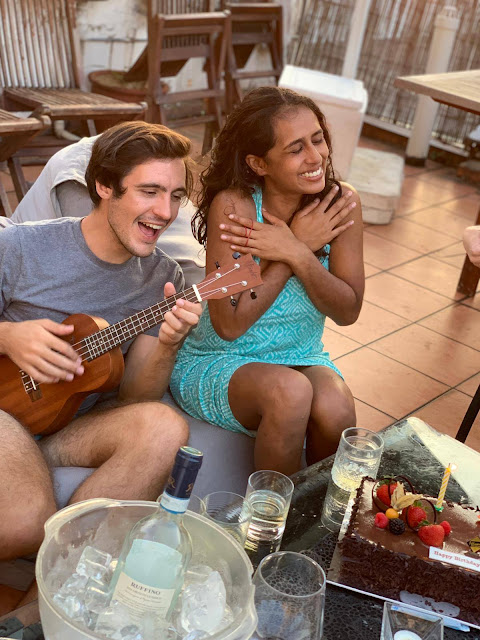 The journey of love here began in Singapore on a beach!

5. I have to consider that my kids won't have the same upbringing I had

I grew up climbing trees, riding my bike like a psycho explorer around the neighbourhood, playing in mud and talking to birds. I grew up in the suburbs of Toronto went to public school with values I had no idea were values like multiculturalism until I moved to countries that didn't respect the same thing I did. I always thought it was a given that my kids would have what I had. But the longer I stayed abroad, the more I realized that I wouldn't be moving back to Toronto. 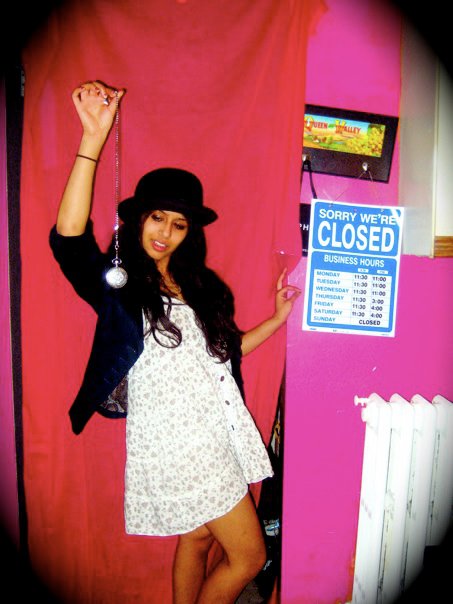 I have loved Paris for a long time and see it as a place I mayyyyy actually settle down. But what does that mean for my unborn babies?! They'll grow up in a concrete jungle with a Parisian laissez-faire attitude? Their nature exposure will be limited to country houses on the weekend?
While I'm older than I used to be, the kids question is still far away. I don't know. One idea that has floated through my head is to be in Asia from ages 0-4 to be able to afford extra help and then...put them in a Canadian International school? Let's cross that bridge when we get there darling.