London vs Paris (vs. America)

The first 5 things my eyeballs saw in London
So, I was here in London three years ago but I don't think it really counts. It was only for a weekend and on a school trip with SciencesPo for the Weekend Integration (like Freshman week). We spent the whole time drunk, partying in Kings College and speaking French (with some Top Shop and Burger King being the only culture I took in). Anyways, I'm here for a job interview (waiting to hear back from them) and taking the time to enjoy this city like a real lass. Below are my very astute and well thought out observations of the city upon my first couple days here. 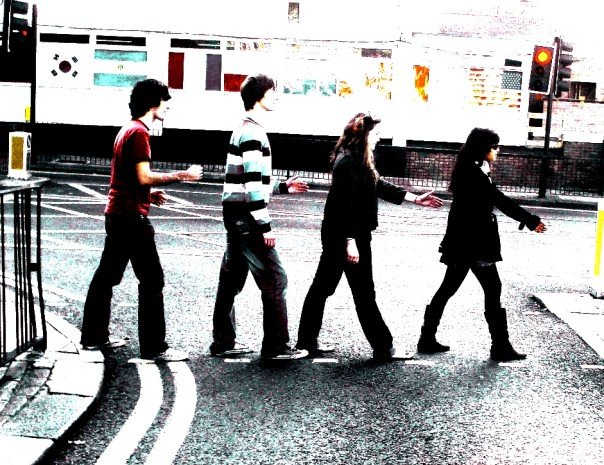 1. The French weren't wrong. It's definitely European New York. There are houses on the streets, everything in North and East London is a bit more grungier, the bars and nightlife seem just more American unlike the beauty that surrounds everything in Paris. Also, the diversity of people make me feel like I'm in NY or Toronto, which is cool (hello my fellow brown brothers!). Whether the American feeling is for better or for worse, I'm not sure, I'll see tonight when I see Is TROPICAL  (who I just posted about) woot!

2. English are not that ugly. I'm sorry but I just kind of thought that in comparison to the French and having grown up watching Mr. Bean, that the English were just all weird teethed mates. But actually walking around the city I was super impressed by the style and the charming faces that surrounded me. The style is much less conservative than Paris and is filled with funky tights and bright colours. I'd have to say the people are much better looking than anywhere in NY or Canada and the accents are a bonus!

3. I have to be wary of getting stabbed by girls. There's something sinister feeling when you walk by certain groups that I never once felt in Paris. I don't like it. I have prepared my mean Scarborough face to ward off arseholes and lay some smackdown if need be this weekend (I'm obviously kidding myself. I'll get eaten alive by butch English girls).

4.  It feels more like Canada. The parks are much more natural than Paris. You're allowed to sit on the grass, whoah, whereas in Paris a majority of the fields are meant for looking at, wtf. The nature itself looks Canadian with soft grass and oak like trees that I used to love climbing as a youth.

5. You WILL go poor here. To take the "tube" did you know it costs 4 pounds for one way? That's like 6-7 dollars to use public transportation! In Paris it's around 2 USD and in Toronto about the same.  Absolute bollocks. McDonalds is more expensive than in Paris too! The Royal Cheese (quarter pounder) is a whole euro cheaper in France. I haven't bought much else, but with staples in life such as fastfood and public transport being hella expensive I don't want to imagine the other costs of living. There are entrance fees to most clubs here too, but at least they're cheaper than Toronto (here it's 5 dollars). I think if you are a poor student, Paris although expensive in itself, is much more livable than London and why I'd rather spend my vacation there than here.

This is only the beginning. Let's see how the weekend goes. Have a good one everyone and please feel free to share your experiences or recommendations on London!

Music
While on the topic of charming Englishmen, Alex Turner and the Arctic Monkeys have just released their new album Suck it and See. Not quite sure if I'm digging it yet because I haven't heard it all but feels a bit too rock and roll for my tastes. What's your take?