Indie Guide to Clubbing in Bangkok

Getting off Khao Sarn Road is a Must 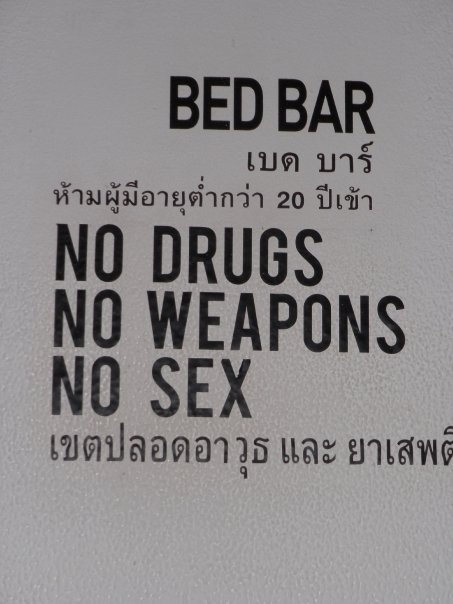 Introduction: Why You Should Listen to me
I have been both resident and tourist in Bangkok and it turned out to be one of the craziest and most mental summers of my life. In Bangkok I partied every night, road in Tuk Tuks and motorbikes throughout this hot sweaty city, ate Red Curry and Tom Yum soup constantly, went shopping and found stylish and cheap clothing in the Thai markets (similar to shopping in HK!) and I did it all while living on probably around $5 a day. Obviously that is not realistic for alcoholics but it is definitely possible without alcohol consumption. I am one poor student who has debt yet nonetheless decided to take an UNPAID internship in Bangkok as well as volunteer on one of Thailand's crazy islands this past summer. Also, I have backpacked through the whole country from North to South, from ghetto trains filled with chickens to motorbikes through mountains. En gros, I just wanted to share how the heck to live the  el-cheapo life and still be a badass.


Clubs and Nightlife
Everyone who back packs through Bangkok stays on Khao Sarn Road, eats on Khao Sarn Road and parties in this damn area. Don't get me wrong, it is a good time but it feels like you're still on
a beach on an island and you in fact miss out on one dynamic Asian city that has so much diversity and lots to offer. If you want to hang out with people who live there and with more locals (who aren't ladyboys looking to steal the Baht off some drunken Brit), party in some of the nicest clubs, do insane after hours parties with all of us who live there and find the hip scene, get the hell out of your shell! Taxis are ridiculously cheap and learn a little bit of Thai so they don't rip you off. I'll explain later in Tips section.


It is very easy to find trashy and sketchy clubs in Thailand, so I won't detail every single one, plus you will stumble upon your own discoveries. What I've listed are what have been my essentials to Bangkok that kept me sane and NOT feeling like a Backpacker 24/7.  They do cost some money but I've detailed what I like to call the Ghetto Game Plan and how to do it all on a student budget, or in my case the budget of an unpaid intern.


Bed Supper Club (Sukamvit): Some people hate this place because it is expensive (800 Baht) and filled with expats and beautiful people. If you are willing to pay (we were NOT, we got in from watching our friend's brother sing there, Yves Baron), it is such a mental time. The people are good looking and not horribly dressed. The theme of the club is having it covered in beds and white sheets. The music ranges from house, dance and electro and if that's not your thing there is another room with more urban stuff. You don't find many tourists here. I know it is expensive but just follow the Ghetto Game Plan.

First if you go by 10 pm and get on the guestlist you get in for free. I know that is super early and there is no time for pre-drink but The Plan allows for that too. Regardless of what time you go, whether you pay or not, DO NOT PAY FOR DRINKS THERE. Get your hand stamped and go to the 7/11 next door and buy a bottle of Sam Song and down that. Or if you're not the chugging type, go to one of the bars in the area and have a quiet pre-drink there. This way you can afford to go to one ballin club and not spend your university tuition on entry AND drinks. Also, I believe the first Thursday of the month is Models Night and FREE entrance. Dress to kill and you'll be fine! Dress code in general is very nice. Ladies, time to whip out those heels from the bottom of your backpack!


Rain Dogs Art Gallery: This is by far the coolest and most trendy art gallery turned club by night in Bangkok. Finding something artsy and indie in Bangkok is difficult, but RD delivers. It is a giant house turned into its current glory founded by expat artists from NY and France. At night they have great and varied music (not top 40 baloney like every where else). It is very small- think of the intimacy of Paris Paris (now Scopitone) but with a great outdoor area too. Yet like everything that is truly hip, it is ridiculously hard to find being hidden away under a bridge and then between some alley way. I got into a fight with one of my closest friends there because he didn't want to/ could not explain the directions to my other friends. One word of advice: check out the Facebook group or website for events. There are Queer nights that we have accidentally stumbled upon and had gay men dressed as Egyptians dancing everywhere! Good times. Also, they play funky artsy movies on Tuesday nights if you're looking for something more calm to do.

Route 66 : This is a street filled with clubs. The club Route 66 is ridiculous and crazy and filled with people from around the world, back packing or expats (French friend in the brown), Thais and lady boys (like the guy in the red). It's mental but not too trashy. This place has several different rooms including a room where a live band plays outside the cool toilets. There is another room that plays only Thai music and then the main room with Top 40 and Techno music. Don't go here for electro but for a great time with friends and a chance to party with normal locals! The design of the place is pretty neat as well with green lazors flashing everywhere. There is a cover though, unless you're Thai then you get in free. However, like most clubs in Thailand when you pay a cover you also get a couple free drinks. This place is ALWAYS packed and if on the off chance that it is not just check out the plethora of clubs next to it.

Sirocco, Rooftop Bar (top of the State Tower): This is probably the most expensive night venture you can have but it is also the classiest. Think New York Bar in Tokyo (where they are in Lost in Translation) or New Asian Bar in Singapore but with a MUCH MORE beautiful horizon and city line and better design.  It is the second tallest building in Bangkok and hella trendy. Compared to Tokyo the drinks aren't THAT expensive... Tokyo we paid over $30 for one drink and here it was 400 Baht or $12 CAD. I know this doesn't suit the student budget, but when you spend every day of your life living off $1 meals and like a bum, I'd recommend this place as somewhere to save up with and go with your love. Beautiful design, white couches everywhere overlooking an amazing city, while the warm Bangkok breeze let's you know that you're still far from home. I didn't go with my boyfriend but I wish I had. It's that beautiful. I'd recommend going and taking one drink. There are other rooftop bars, but I swear to you this one is the most dazzling and classy.

Updated May 2010
On recommendation from my young and cool diplomat friend living in Thailand even after I left:

Tonglor soi 10: new place, plenty of great night clubs. Clubs are very Thai but more designers, IT, marketing kinda crowd not excited Ladyboys and desperate women. Real dance floors, not filled with tables like other Thai clubs are. If you're looking for a less sloppy and young crowd this is better for you. Quoting my friend, most people are English speaking and the girls are extremely good looking. Check out:


Closing Time = Afterhours
Afterhour clubs in Bangkok are by its very nature trashy. People are more drunk than they should be, Hungry eyed LadyBoys come  out to take advantage, but as long as you are properly inebriated you will love it too. The clubs are all kind of the same (I think but I suppose my memory isn't crystal clear) and most IMPORTANTLY- you can often get a taxi free from Route 66 to an afterhours party. If you do have to pay, you can cram up to 9 people in a taxi, sounds crazy but we have defied the time-space equilibrium itself and have done it. Be ready to party till 6 or 7 in the morning and have some street side Pad Thai for Breakfast. So much fun, it'll make your memories of Bangkok much more fond albeit blurrier. Below I've listed two places, not much to say about them.  Just list your destination to the taxi driver and he'll zip you away.


(Photo Right: Insane night where we lost one our friends in the Afterhours club. We thought he had died but the sonofagun shows up 5 hours later randomly next to us on the street corner Pad Thai stand! Epic night.)

Indie Guide to Singapore: Where it's not like Disney World

You may not love this song yet but you will. This was a staple in the region. Nobody but you!